Trembling with excitement, Bertha Watt sets out on the adventure of a lifetime: her and her mother leaving behind their old life in Aberdeen to meet up with her father in Oregon and start a new life full of promise and opportunity and, if she behaves herself, a 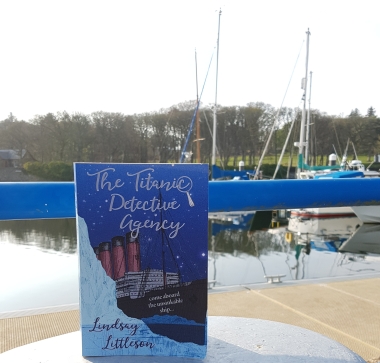 Facing several boring days crossing the Atlantic onboard a ship, she and her new friend, Madge, decide to emulate Holmes and Watson and set up The Collyer-Watt Detective Agency. They quickly stumble across two intriguing mysteries, one involving treasure and another involving a mysterious family with a shady father. Along the way, Bertha befriends Johan, a 3rd class passenger with a desperate passion to reunite his family. But something even more ominous is lurking over the horizon: It’s April 1912 and Bertha, her family and her friends are sailing to America aboard the Titanic’s maiden voyage.

The Titanic Detective Agency by Lindsay Littleson is a tale of two halves. The first; a look at the innocent and nostalgic childhood from the early twentieth century – both that of the privileged, and the heavier responsibilities of those in poverty. The second half is wrought with tangible horror and heartbreak, as the ending that you almost forgot was looming comes to fruition.

Littleson has done her research, and although the narrative is fiction, all the characters are based on true-life passengers aboard the doomed Ocean liner with some of the more out there twists and turns being based on fact – truth is often stranger than fiction after all.

It’s a challenging introduction for its target audience of 8 to 11 year olds. One which focuses on the humanity involved in the maritime tragedy, but it’s all the more worthwhile for this focus, The Titanic Detective Agency doesn’t shy away from the horror and lasting impact the accident had on the few survivors.

It’s well written, engaging and doesn’t talk down to younger readers. More than that it brings a hundred and seven year old tragedy to life. And just look at that cover – it’s beautiful!