Claire is not a Librarian, she’s an ex-human book wrangler. And in Hell’s library that’s an extreme sport. 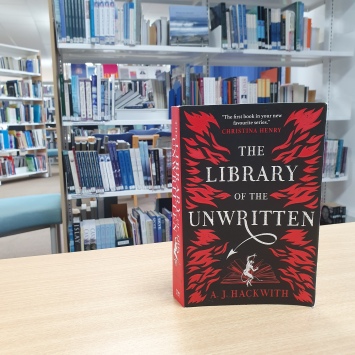 Hell’s Library is vast; filled with all the books that have been dreamt up but left incomplete or never written. It’s a treasure trove of abandoned possibilities which may yet come to fruition. But every so often the books get restless of waiting and they wake up. Claire’s job is to keep them from escaping before their time and unleashing chaos; a job which has kept her so busy that she’s forgotten that she also protects this pot of powerful imagination from some of the worst denizens across the afterlife dimensions. Demons who would do anything to get their hands in the raw power contained on her shelves.

Such is the set up for The Library of the Unwritten, the first in a new fantasy series by A.J. Hackwick with a sizzling concept.

Claire and her library assistant, ex-muse Brevity, are perfect as the leads supported by nervous newbie demon Leto. Full of doubt, regrets and self-recrimination yet having to find some self-awareness and fight through their own issues to protect the inter-dimensional library system from apocalyptic upheaval.

In fact, Claire and her Library team were so charismatic and engaging that it left other characters in the dust. Ramiel and the hubris of angels was the weak link in the story for me, as I found myself desperate to get past those chapters which didn’t follow Claire. But his arc leaves him in a place that is more promising for future instalments. Hero as well spends much of his development in what feels like a set up for future books, and again one that I’m excited to see the pay off.

Despite the glamourous inter-dimensional hopping through afterlives old and older, it’s the more personal character moments and stories that give this story its heart, and a surprising amount of emotional resonance in a twist which you think you see coming, but then it ducks and weaves through its own narrative self-awareness to become something new. And better.

As a new series it’s a little slow to get going; there’s a lot of complex and very big ideas to establish and explain before the story can really start to run, but once it does find itself it soars, promising a thrilling series ahead. While I may have struggled a little to begin with, by the end I was pre-ordering the next in the series (and rather excited to find it’s out later this year).

And again I’m a sucker for anything to do with rebellious and subversive librarians!