For years after reading American Gods I, slightly shamefully, claimed that I wasn’t a huge fan of Neil Gaiman’s writing. I thought that my love of Good Omens must come from Pratchett’s involvement, but in the last 6 months I have (thankfully) been completely disabused of that notion and now I have discovered two new favourite FAVOURITE books: The Ocean at the End of the Lane which I reviewed previously, and Stardust.
Set in the human town of Wall and the contrasting multi-coloured world of Faerie, this is a more intelligent, thoughtful and hypnotic take on the two-world trope made famous by the Wizard of Oz – where you identify with the muted world but you desperately want to stay in the brighter dreamlike land beyond the confines of the story.
Our hero, Tristran Thorn, is a child of two worlds (unbeknown to him), who’s first experience of love sets him on a quest for a fallen star. Along the way, he encounters goblins, unicorns, witches and sentient forests based on Tori Amos, but more importantly he grows into the man he should be and comes to rectify youthful mistakes while maintaining his almost naive optimism.
This is a grown-up fairy tale full of hope and growth and magic, where the very prose makes you feel like you are coated in Stardust. I loved every word.

The Record Keeper by Agnes Gomillion ⭐⭐⭐⭐⭐

Arika of House Cobane has spent her life identifying as a ‘First Brother’ of Kongo and training to be an elite Record Keeper, perhaps even a senator, for her region. She lives in a society built out of the ashes of old earth following a World War that left most of the planet uninhabitable, and the remains of humanity scraping their survival out of the

charred earth. With the survival of the species on the line, the three surviving tribes: The Kongo, Clayskins and English have each accepted responsibility for one facet of continuing life and each race must pull its weight for everyone to survive. Or so Arika believes. In reality the new structure is built as much on oppression and racism as the old world structure was, but obedience is guaranteed through the mirage of equality.

As a child Arika had her streak of rebellion and fight brutally stripped from her ‘for the greater good’, but it simmers beneath and the Record Keeper charts her reawakening as she is forced to confront the truth which she has been sheltered from, including her own privilege and oppression of her own people. It is a challenging, powerful and empowering read, as it becomes clear that the more things change, the more they are kept the same, until we confront our power structures and stand up and enforce change, all while set in a future dystopia that is frighteningly like our current world.

The latest book in one of my favourite book series’, the Chronicles of St Mary’s by Jodi Taylor continues the story of a group of chaotic, beautiful tea loving historians who investigate events in contemporary time (time travel to you and me). Hope for the Best is the 10th book in the series, and continues to follow the adventures of Max, Leon, Matthew and Dr Bairstow among others.

I love these books, they’re funny, engaging and usually reasonably light (except for book 8 which I’m STILL traumatised by, but begrudgingly accept) and speed through different time periods and adventure sequences. I’m a sucker for time travel stories but I’m ready to be done with Ronan and increasingly the Time Police, who I’ve never quite warmed too after the sudden alternative world flip (and don’t mention their behaviour over Matthew). I am always happy to reread these over and over and over again.

Does what it says on the tin, a collection from Bookshop owners all over the world which gathers together some of the more questionable conversations had with customers or overheard between friends and families. Everyone has moments of ditziness and comes out with something absurd but when they are gathered together in one book it is eye-wateringly funny. I tore through this in about two hours and was wheezing by the end, but it could easily be used as a Dip in and out read.

After finally reaching it on my TBR pile, I tore through Green Valley in the 24 hours. A very special example of Techno-Terror, a Sci-fi/Horror blend about a future city split between two extremes: A technology drenched walled-in city, Green Valley, where people have chosen to live in a virtual world utopia and their reality is a mystery; and the rest of the country where a total Technology ban exists in order.

After children riddled with nano tech are found dead, the murder investigation leads to Green Valley where Lucie Sterling’s niece, who she only met once before the wall went up, has also gone missing. Louis Greenburg manages to explore humanity’s relationship with technology without ever being preachy – and with a bloody terrifying ram thrown into the mix. It is creepy and intriguing and raises questions about why humanity is so driven to seek out extremes.

Thanks to @Titanbooks for the review copy. And the nightmares!

The Winner of the International Man Booker Prize 2019: Celestial Bodies by Jokha Alharthi is a dense, sprawling, epic, which covers the lives of multiple generations of families, in particular 3 families, in the village of al-Awafi in Oman, in just under 250 pages.

It is poetic, and sometimes difficult to navigate, but completely hypnotic and engaging. It covers the trauma and joy of being a woman in a country undergoing massive cultural shifts, and beautifully illustrates generational differences in culture and expectation.

Confessions of a Bad Mother – The Teenage Years by Stephanie Calman ⭐⭐⭐⭐

A book which will speak to the heart of any parent; Confessions beautifully encapsulates the bittersweet frustration of your children growing up and simultaneously pulling away from you, the dichotomy of pride in their achievements and their ability to overtake you and pain as they make it clear they no longer need you. The book covers a mother’s journey from her children being 7 (yes, some teenage attitudes start this young) to leaving home. Well written and well observed, it’s a good warning for what I’ve got ahead of me! (my eldest has turned 7 and is already displaying some of these tendencies).

Girl in a Cage follows the story of 11 year old Marjorie Bruce, Robert the Bruce’s

daughter and future mother of the Stewart dynasty, as she is captured and held hostage by Edward Longshanks during the Scottish wars for Independence. Simultaenously describing the first two weeks of her capture alongside the 8 months leading up to it, where her father took up the crown, resulting in his family having to flee across Scotland as fugitives, this is a story aimed at 8 to 11 year olds.

Over the last couple of years @Cranachanbooks has established a reputation for bringing a human perspective to historical lessons, and rendering them identifiable and interesting to younger readers, and so it is with Girl in a Cage by Jane Yolen Robert Harris (he of Talisman fame). It’s a winning formula, and one that really brings history to life.

The Girl in Red by Christina Henry ⭐⭐⭐

A post-apocalyptic retelling of Red Riding Hood with a dash of The Walking Dead and Cormac McCarthy’s The Road thrown in, albeit with a little more optimism and a prosthetic equipped, mixed-race feminist heroine who suffers no fools. This was an interesting and compelling re-imagining but, for me, there were a few too many elements chucked in the mix without adequate explanation.

I get that Red is just a ‘normal’ citizen and not a ‘chosen one’ who is looking for answers, but when there are genetically created monsters (aliens?), AND an apocalyptic croatoan type sickness creating havoc around the globe at the same time but with no clear or confirmed link then I need a few answers even if she doesn’t. This, combined with a time jump ending, made it feel like Henry had an interesting idea but got bored towards the end and couldn’t find a way to link it all. That being said, Red was a great grumpy heroine and I’ll definitely check out more of Henry’s re-tellings. Thanks to @titanbooks for this preview copy.

My Book subscription book this month was something which I would never have picked up, but it was ok. A tame, humourous look at life among the London Literrati in the 80s. Funny and sweet in places, and with some great references and famous playwrights popping up and behaving ‘just like us’ but with more eccentricity. It was a little plodding, just like looking at someone else’s holiday snaps.

This month I did something which I never do. I refused to finish a book (and believe me I’ve read some dross) I do wonder however if it was just me as it has got incredible reviews elsewhere, so if you’re a horror fan don’t take my word for it, but my DNF was Growing Things by Paul Tremblay. An anthology of horror tales, I managed just 3 so can’t speak to the overarching themes. The stories themselves all started promisingly and with intriguing concepts, and then I’d lose what was going on. I didn’t find them creepy (as my husband suggested), just confusing, and given the promise each one held I just found it disappointing.

Pick of the Month: Stardust by Neil Gaiman 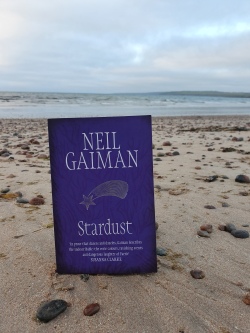 Dud of the Month: DNF Growing Things by Paul Tremblay

I love Classical mythology. They have some of the most nutso stories and lessons can be learned from them to this day. But even more than the originals I love stories which are reframed to place the women front and centre. While the men in these epic tales bluster about causing carnage and generally being swept along in the carnage of the Gods or making catastrophic mistakes protecting their fragile masculinity, centering the women has allowed a more complex and critical viewpoint to be explored within these well trodden stories - allowing new modern access points.
Every so often a book comes along that changes the way you see the world.
I've just finished my first proper buddy read with the lovely @thelazyafternoonclub and it was a pretty intense one to start with! My Dark Vanessa by Kate Elizabeth Russell is a dark, claustrophobic and challenging tale of a woman in her 30s trying to come to terms with her "relationship" as a 15 year oldwith her first love, a 40 something sleazebag of a teacher, who from an outside perspectiveis obviously a predatory sleazebag.
Happy happy world book day! 📚 The day that I like to think of as "Christmas" for all us bookworms, because, despite not needing an excuse, and CERTAINLY not needing to add to my TBR, I do like to treat myself to a book haul today.
Utterly LOVED A Good Girl's Guide to Murder; a YA thriller where Pip has grown up in a small town burdened by the fact that 5 years earlier local boy Sal Singh murdered golden girl Andie Bell.
I am so far behind on posting the books I've read this year - mainly cause I can't be arsed leaving the house and I'm crap at taking insta friendly pictures without the help of nature!