I have recently become obsessed with Marie Kondo (as it seems has everyone else) and recently began working through her recommended processes. For the most part I’ve found that it seems to work for me: taking out everything and only returning the things which provide “joy” is genuinely very cathartic. However I’ve now reached the Books category, and here is where Marie and I part ways. She claims that she keeps 30 books or less (although, granted, she isn’t demanding that everyone else does the same). As a community of book lovers I think we all seem to agree that this makes her some kind of soulless monster and it has seriously damaged her reputation as an innocuous de-cluttering guru.

Because here’s the thing: Books are not clutter. They are worlds; adventures; lifetimes full of emotional nourishment. They are tools which help us on our journeys to self-awareness. Besides that, they are just bloody good fun. Every book on my shelves provides joy, so good luck prying any of them out of my hands, but I’m certainly suspicious of someone who only finds joy in 30 books. I mean honestly, I’m decluttering to make room for MORE books!

Saying that, I’m a bibliophile and I can’t resist a book challenge so I’ve decided to play along. Grudgingly. So gun to my head, if I HAD to pick 30 books in hard copy and could no longer have any others (aside from the sneaky kindle which would obviously have all of the removed books stashed away electronically) what would they be?

Pride and Prejudice by Jane Austen

The Colour Purple by Alice Walker

The Handmaid’s Tale by Margaret Atwood

Notes on a Nervous Planet by Matt Haig

The Secret Island by Enid Blyton

The Ocean at the end of the lane by Neil Gaiman

Just One Damn Thing After Another by Jodi Taylor 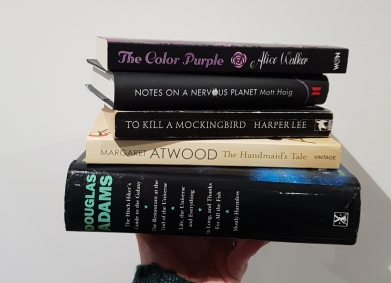 The collected works of Shakespeare (This may seem like a cheat, BUT it is a book that I own. One binding= one book!)

The Hitchhiker’s Guide to the Galaxy by Douglas Adams

The Princess Bride by William Goldman

Harry Potter and the Prisoner of Azkaban by JK Rowling

I know why the Caged Bird Sings by Maya Angelou 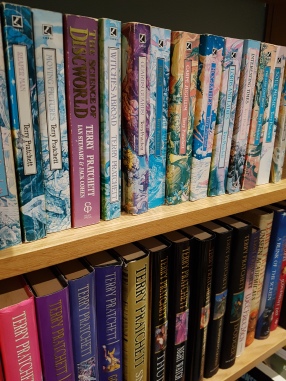 Which Lie did I tell? By William Goldman

The Wasp Factory by Iain Banks

To Kill a Mockingbird by Harper Lee

The Wasp Factory by Iain Banks

Is there a large amount of Terry Pratchett on the list? Yes. To be honest you’re lucky the list didn’t just say “Discworld series”. And this was painful, but these are the books that I come back to again and again, or are so beautiful that I’d bite anyone that tried to remove them from my possession. What would be on your list? CAN you narrow it to 30 or do you struggle to make it up to 30? And what do you feel about the idea of decluttering books? Let me know what you think.

2 thoughts on “The Joy of Books”