Never having read any of the Amir Sisters’ series before, despite being an avid fan of 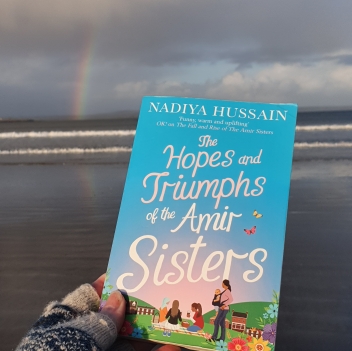 author Nadyia Hussain’s Bake Off career, I was nervous that I would be playing catch up with this – the third in the series. But I shouldn’t have worried.

Told from the point of view of Mae Amir, the youngest daughter of a large Bengali family The Hopes and Triumphs of the Amir Sisters is a humorous, heartwarming romp through family life as Mae tries to figure out her place in the world and her new position in the family she is tentatively spreading her wings from.

Struggling with loneliness and self-confidence issues Mae finds herself starting to make choices she is not always comfortable with but unable to turn to anyone for support – as she is usually the foundation they lean on – a situation which is no longer tenable as Mae grows up, and yet no one seems to have noticed.

There’s a lot going on in the story, and references made to previous stories, but I never felt lost. Despite being part of an ongoing series, Hopes and Triumphs made an excellent stand alone book (although I am keen to catch up on the rest of the series now) and Mae was a balanced compassionate heroine with an identifiable struggle of feeling overwhelmed with finding her own identity outside of a family of very big personalities.

But despite the apparent lightness of the story it doesn’t shy away from more serious subject matter –racism, unnoticed prejudices, micro-aggressions and the dangers of sexual assault, are all touched on as well as the cultural barriers Mae faces to being allowed to spread her wings and explore the bigger world beyond the Amir households.