Sal by Mick Kitson
Sal and her little sister Peppa have suffered for years at the hands of their step-father. But with a new horror threatening Peppa’s innocence, Sal decides that enough is enough and they’re leaving. The 13 year old Glasgow girl takes matters into her own hands and her and Peppa flee for a life in the Scottish hills fuelled by Youtube survival videos and a desire for safety.

Sal is an undervalued hardened, traumatised and big hearted heroine, who’s love for her sister is her guiding star. Kitson nails the voice of a young survivor who takes solace in her own capabilities for survival and creates one of the most wonderful protaganists. It’s a slim book which packs a punch and gut punches you at the everyday ordeals our children are having to face while also proving optimistic and is one I’ll be recommending to people for a long long time.

The Burning by Laura Bates
Anyone who likes to dismiss the lives of teenagers as playground politics NEEDS to read this Young Adult book. Anna and her mother pitch up in a small Scottish town with no background and new names. In the course of settling into a new life Anna begins researching the witch hunt of a woman who lived in her new home over 200 years earlier. But what she finds dovetails horribly with her own past which begins to catch up with her.

This is the first generation that has had to

deal with persecution by internet and the humiliation that entails, but the drive to persecute women for their mistakes is as old as time and Bates manages to weave a powerful and gripping novel that deals with misogyny, social media and the hazards and challenges of being a modern teenager trying to navigate a world with no guidance or understanding from previous generations. It really is a must read for everyone.

On the front line with the Women who Fight Back by Stacey Dooley
Stacey Dooley may have risen to fame this year thanks to her warm performance on Strictly, but she has long been a journalistic force to reckon with. Down to earth, direct and endlessly empathetic she has shone a light on issues in some of the most dangerous places in the world and humanised the people experiencing things beyond our imagination. She brings this same warmth and curiosity to this book about some of the most incredible women she has met and the horrors that they have survived and overcome.

It’s a lovely book that is easy to read in style and challenging in content but focuses, appropriately, on the women she has met rather than on herself (although fans of Dooley won’t be disappointed either.)

Blindness by Jose Saramago
I love dystopian fiction. I’m not sure why. I don’t think I’m a masichist, but I do enjoy thought experiments on how people might react if everything is flipped on them without any warning. In Blindness, a contagious disease which causes sudden blindness suddenly pops up and spreads rapidly and indiscriminantly around the world. What follows is a horrific look at how quickly structural respect and authority breaks down and how dependent people would become on the fickle kindness of individuals. It’s engrossing and predictably tragic in some places but still manages to introduce glimmers of hope towards the end.

The Reckoning by John Grisham
I loved this, right up until the end. Grisham is a master at weaving stories full of humanity and compelling characters but presenting them in analytical case study type ways. In The Reckoning, popular farmer Pete Banning gets up one day, calmly goes about his business and then walks into his local church and executes local pastor Dexter Bell. What follows is a character study of a community and time period to try to ascertain what possible motive there could be for such a cold killing. And it does keep you gripped, right up until the big reveal which I found a massive let down. 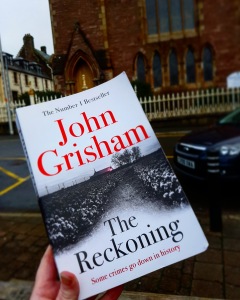 Without giving any spoilers, I think I understand how in the time period and location the motive might have proven scandalous, but in this day and age and after such a tightly wound pre-amble, it felt senseless and unnecessary and simply not worth the destruction the crime wrecked through the family and community. This may have been the point – how senseless it was, but given the time spent building empathy for Banning and the horror felt by his family at the reveal I think we are meant to be as shocked as them. I wasn’t, and it undid any intrigue and sympathy I did have for the characters. I’ll still read every Grisham I can get my hands on though!

Old Baggage by Lissa Evans
Mattie is an aging suffragette, still full of passion but pushing a cause that society has lost interest in, so she channels her energy into setting up the Amazons. A local girl’s group aimed at demonstrating first hand that the attendees can be intelligent, capable and ambitious.

Mattie is a loveable barging train of a character who can’t understand the complex emotions in the characters around her, even when they are directed at her, but is full of heart and good intentions. It’s a nice novel about what happens to protestors once their fight is deemed over, and they’re not ready to walk away.

The Fifth Risk by Michael Lewis
Michael Lewis has spent some time moving around the US Government departments that no one understands and identifying the essential and completely underestimated services they provide. It is clear that while it might be frustrating, but acceptable that the average US citizen does not understand these agencies, the terrifying reality is that the current administration does not understand them, has no interest in understanding them, and is slowly and irrevocably descimating them and that thousands of hidden essential services they provide.

There is a general feeling that the world is burning right now with Global Politics and the erosion of human rights, but what this does is provide the evidence in greater detail that any collapse may come not just from intentional destruction but from nonchalant brushing under the rug of issues that just aren’t “sexy” enough.

Sherlock Holmes Vs Dracula by John H Watson
According to a forward by Watson, Holmes actually ended up investigating and helping to take down Dracula and was a key protagonist during the events of Bram Stoker’s tale, but thanks to Van Helsing’s ego his contributions were erased from history, except in this “re-discovered” account.
It’s written as a Sherlock Holmes novel, with the concise style and sudden leaps of ‘logic’ and follows the story of Dracula, slotting in Holmes and Watson were they can reasonably be expected to have an impact. It’s a neat little read, although my pleasure was mitigated by the understandable restrictions on how much Sherlock can actually effect. In the end he basically washes his hands of it saying “job done” despite Dracula still being at large, but as a thought experiment it is good fun.

The Secret Island by Enid Blyton
Peggy, Nora Jack and Mike run away from abusive and neglectful guardians and set up a new life for themselves on an island in the middle of a lake. With farming and survival skills what follows is a nostalgic look at an extended game of playing house, whereby the children prove how much more capable and better off they are when left to their own devices.

This was my favourite book as a child and I recently picked it up again as we were looking at Children’s Books in my book club. The cover has long been falling off it, and I remember how I used to finish it and flip to the start to begin again. For nostalgia’s sake I still love it, but I think we can all agree that a lot of Enid Blyton just doesn’t sit comfortably anymore. Full of privileged children exhibiting spoilt behaviour and horrible levels of toxic masculinity, it may send lovely big messages but the more subtle messages it sends mean I will not be reading this to my children. Even if I will still keep my old battered copy and occasionally re read it.

Siddhartha by Herman Hesse
Siddhartha was a tough read. I’ve been reading a lot of Buddhist texts recently and really enjoying them, but I just couldn’t shake the feeling that Siddhartha was simply playing with his privilege.
It follows the story of a man looking for meaning and enlightenment in the time of the Buddha and plays a little like an ancient Forrest Gump, but with a less likeable lead. It’s short, and there are some interesting Buddhist principles in there but it wasn’t the most engaging tale.

Hope Never Dies by Andrew Shaffer
I was desperate for something funny and ridiculous, so a buddy comedy where Barak Obama and Joe Biden go off to solve a murder case seemed perfect and I sat down ready to laugh with two beloved characters. It. Was. Awful. Biden was portrayed a jealous jilted partner simpering after Obama who was distant, egotistical and dismissive. Neither was likeable and the plot was barely there. I wasn’t expecting it to be realistic to the President and vice-president – obviously. But given the success the internet had with generating a funny and warm bromance between the two through meme wars, I did expect them to be a little…nicer. And to like each other a little more. Shouldn’t have bothered finishing it.

Pick of the month: Sal by Mick Kitson

Dud of the month: Hope Never Dies by Andrew Shaffer